Hera at Pinsarella we’re developing more and more recipes and flour mix to take pizza to the next level.
Here’s our Spirulina Pinsa Curst line, healthy superfood is served! 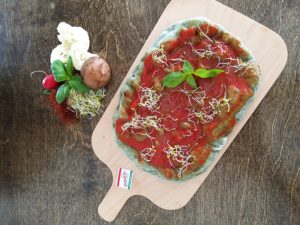 Spirulina is a seaweed that, thanks to its many beneficial properties, it is considered a “superfood”. But what exactly is spirulina and what is it for?

According to many studies, the combination of carotenoids, ascorbic acid and vitamin E, should give spirulina important antioxidant properties. In addition, to these components are added the effects of some pigments such as phycobilins and chlorophyll: thanks to this union it would be able to protect the body from free radicals, removing neurodegenerative diseases and some tumor forms.

The combination of essential amino acids and beta-carotene, on the other hand, would give spirulina great powers in stimulating the immune system. In fact, this alga is characterized by good immunomodulatory properties, which allow the body’s immune response to be regulated and made more efficient.

Energy, endurance and cholesterol
Also from the point of view of the energy given to the body, spirulina would be a particularly useful product in periods of poor physical and mental resistance. In large doses, in fact, it would help athletes improve their performance, increase fatigue resistance and improve performance under stress. Its content in ferridoxine and biotin, during intense muscular efforts, help slow down the formation of lactic acid.
According to some studies, spirulina would help fight allergic rhinitis symptoms, such as respiratory tract congestion and localized itchy phenomena.
A study dating back to 2007 showed that the daily intake of only 4.5 grams of this food for a period of 6 weeks resulted in the test patients the reduction of total cholesterol and triglycerides, the increase in “good” cholesterol (HDL ) at the expense of the “bad” one (LDL) and a drop in systolic and diastolic blood pressure.

Other beneficial effects: hay fever, HIV, malnutrition, diabetes
A 2005 study published in the Journal of Medicinal Food showed that the administration of spirulina is protective against hay fever.

According to research carried out in vitro in 2012, spirulina has an inhibitory effect against the replication of the HIV virus in different types of human cells.

Thanks to the administration of spirulina on children suffering from malnutrition or malnutrition it would be possible to cure anemia, while stimulating an increase in body weight. For this reason, its applications especially in the poorest countries are being examined by the international medical community.
Spirulina can also be used in the treatment of arsenic poisoning, because it is effective against keratosis and melanosis.

Several studies have shown how effective this alga is in reducing blood sugar levels, helping the effectiveness of antidiabetic drugs.
Most of these studies, however, are often contested for sampling limits: they are often research conducted on very small groups of patients and for limited periods of time.

Try our special roman pizza with spirulina,  Tasty and Healthy, ready to bake and serve in 5 minutes.

One thought on “Spirulina Pinsa: Superfood is Served”